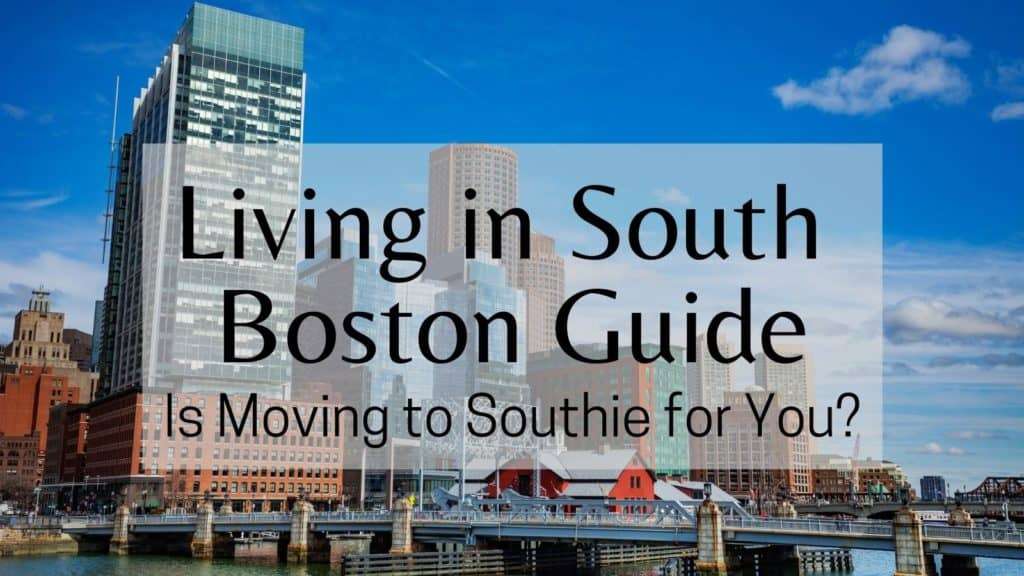 Living in South Boston Guide | 🤷‍♂️ Is Moving to Southie for You?

Considering moving to South Boston, MA? This historic neighborhood, one of the oldest in Boston, has been made famous by movies like The Departed, but it’s become one of the most exciting, vibrant, and fun neighborhoods in Boston over the last decade. Home to some of the top tourist destinations, a strong arts and culture scene, and beloved by Southie locals, you’ll find a lot to love about living in South Boston. Here’s why South Boston, called Southie by locals, should be at the top of your list of neighborhoods when moving to Boston, MA.

The South Boston area on the peninsula called Mattapannock was settled by Puritans in 1635. Until the 18th century, the area was a grazing area, but it was connected to downtown Boston by bridges in the early 19th century when Boston annexed the region. The peninsula experienced rapid industrial development including glassworks, foundries, and machine shops which brought in immigrants who moved to the lower end of Southie.

On St. Patrick’s Day in 1776, George Washington famously forced British troops to evacuate with a cannon on Dorchester Heights. The fortification was replaced with Fort Independence on South Boston’s Castle Island where Edgar Allen Poe was briefly stationed. This was his inspiration for the Cask of Amontillado.

Starting in the 1820s, the Irish became the region’s largest immigrant group. While many early Irish settlers to South Boston were skilled workers, the Irish potato famine brought in a surge of poor Irish immigrants who lived in the Lower End. When the Great Fire of 1872 destroyed much of the Fort Hill neighborhood, some of the poorest immigrants in Boston moved into Southie.

South Boston may be known for its large share of Irish Americans (although this number has decreased with gentrification), other early settlers included Canadians, Germans after the Civil War, Poles, Lithuanians, Russian Jews, and Italians. By WWI, Southie’s immigrant population was 70,000, double what it is now.

In 1901, Southie residents convinced Boston to host an Evacuation Day parade to celebrate the retreat of British troops. This later transformed into a St. Patrick’s Day celebration which is still hosted in South Boston today. Southie has undergone significant gentrification and it’s now one of the most expensive areas of Boston. Much of this is attributed to the development of the largely abandoned Seaport District into an “Innovation District.”

South Boston is located to the south and east of the Fort Point Channel along Dorchester Bay. It was once mostly separated from the mainland except for the narrow Dorchester Neck isthmus, now expanded by landfill. The neighborhood is just 2 miles south of downtown Boston.

South Boston includes many smaller neighborhoods including Fort Point, City Point, Telegraph Hill, West Broadway, and the rapidly developing Seaport District, the main entertainment district of the area. Dorchester Heights is the central area of Southie and the highest point with Boston Harbor and downtown views. 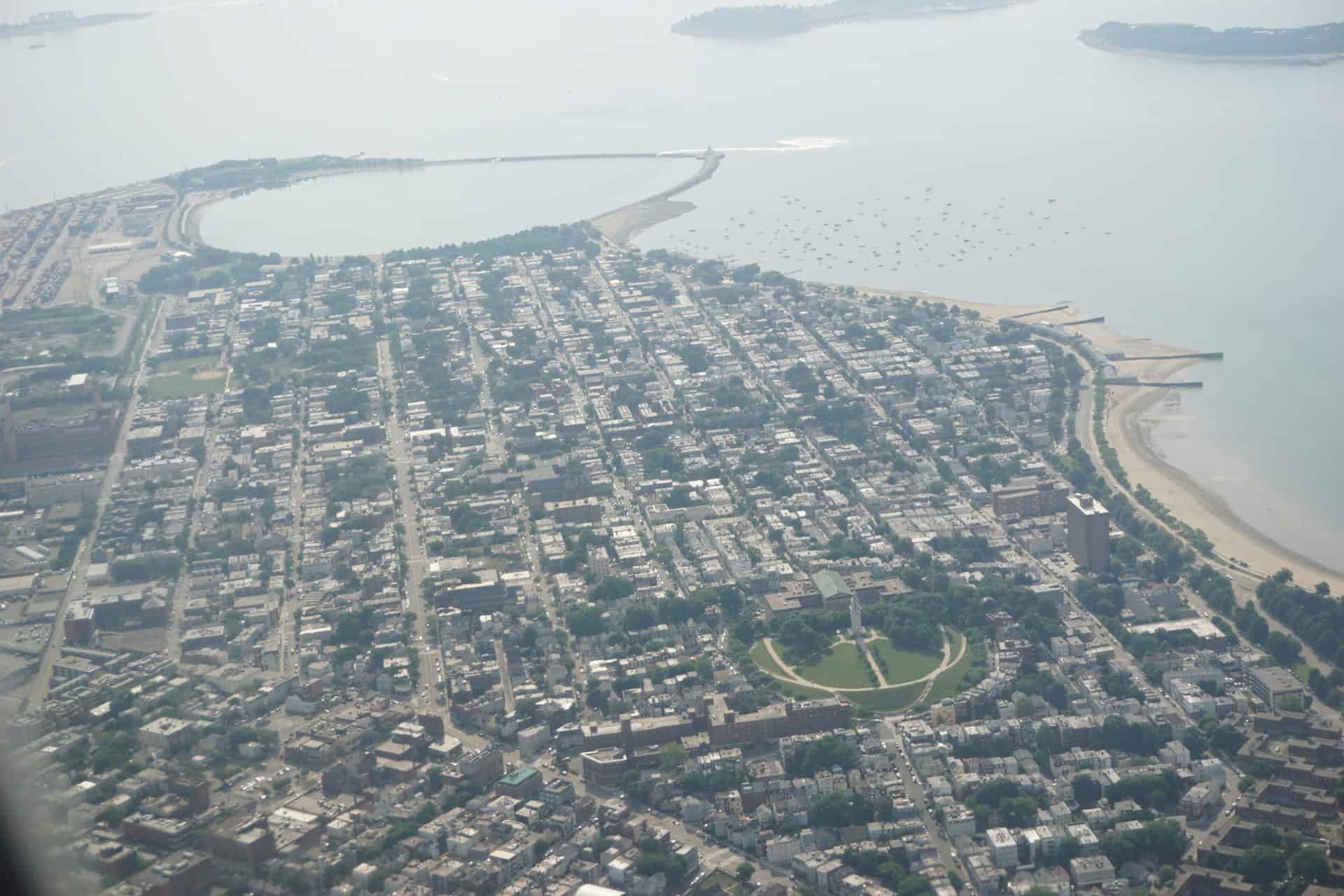 If you’re living in South Boston on the waterfront, you can enjoy convenient water transit. The Seaport/North Station ferry is a commuter ferry service and there is a water taxi that connects South Boston Waterfront docks with the airport and other destinations.

You can also get around South Boston and the waterfront with private shuttles: the Southie Shuttle, Channel Center Shuttle, and the Cultural Connector.

Southie long ago earned a reputation as a rough part of Boston made famous in movies like The Departed and Southie. While long home to the city’s poorest immigrants and their descendants, South Boston is now one of the most exciting places to live in Boston with charming rowhouses, gourmet markets, entertainment and arts, and a fun waterfront area.

Southie has maintained its strong Irish identity. With its waterfront location and large area, it remained mostly Irish American long after other neighborhoods in Boston with multiple generations of families staying in the community. This led to a fierce localism and protective feelings against newcomers. South Boston has changed dramatically over the last decade, though. The area has seen a large influx of immigrants in recent years with Albanians, Chinese, and Dominicans now making up the largest immigrant groups with a total immigrant population of 14%, still about half the foreign-born average for Boston.

Today, South Boston is popular for families and young professionals attracted to nearby downtown access and the Southie sense of community. The population of South Boston is 33,700 which is 79% White, 8.3% Hispanic, 5.7% Black or African American, and 4.8% Asian. Between 2000 and 2015, the population soared by 25%, particularly among 25 to 34-year-olds. Southie is one of the best Boston neighborhoods for families: 40% of households in South Boston are families! The neighborhood has a median household income of $77,223 – far higher than the Boston median of $55,777.

What is it like living in South Boston today? This urban neighborhood is known for its strong traditions, history, and sense of community. Residents love being close to downtown Boston with tons of nearby amenities. The neighborhood’s unique accessibility to the airport, ocean, downtown, and major highways give it an easy appeal, but there’s also plenty happening to keep you in the neighborhood too.

South Boston is one of the most exciting places to live in Boston with endless attractions and activities for singles, millennials, and families. Curious what you’ll enjoy doing after moving to South Boston? Here’s a look at top dining, shopping, and cultural spots.

The Fort Point Channel Historic District is Boston’s arts hub. You’ll find the Boston Children’s Museum here sandwiched between downtown and the Seaport District across the Congress Street Bridge. This area has tons of family-friendly activities!

The Seaport District was the site of the Boston Tea Party and is today home to an entertainment district and high-rise condos. You’ll find fun South Boston attractions like the Boston Tea Party Ships & Museum and amazing waterfront restaurants like Yankee Lobster, a hole-in-the-wall and local favorite with fresh seafood and lobster rolls.

Want a real Southie experience? Grab breakfast at Mul’s, a Southie landmark that’s always busy with morning regulars, then explore some of the best Irish pubs in Southie like Shenannigans Bar.

You’ll find tons of specialty stores and boutiques along Broadway like Deirfiúr Home, an upscale home furnishing store curated by Boston-based designers. There are several grocery stores in the area like Foodie’s Markets on Broadway for the essentials. Check out other local South Boston boutiques from Caught In Southie, a Southie neighborhood magazine.

One of the joys of living in Southie is the beaches. The family-friendly beach at the Curley Community Center is a popular choice for recreation. Castle Island is always a fun destination with panoramic harbor views and the historic Fort Independence. Sullivan’s near Pleasure Bay is a famous grill and seafood restaurant serving up hot dogs and fried clams.

Here’s where to find the South Boston attractions mentioned. Check the map above for other fun things to do in Southie!

Saying the South Boston real estate market is hot is an understatement. South Boston’s population has surged 25% in recent years and home prices have also skyrocketed. South Boston has experienced a surge in construction that has added exciting entertainment and dining options plus a host of luxury condominiums and multi-family properties. The Seaport District has become one of the most desirable neighborhoods in Boston with new high-rise condos and ever-present construction.

Ahead of moving to South Boston, it’s helpful to know what to expect in terms of housing prices and options.

Southie has become unaffordable to most buyers today with a median home price in the 02127 zip code (excluding Fort Point and the Seaport District) increasing from under $400,000 to over $680,000 within just seven years. When those two high-cost areas are included, South Boston home prices rose from under $600,000 to around $1 million during the same time period.

Boston experienced a massive drop in rent prices in 2020 due to the coronavirus pandemic and an exodus of renters. Boston had the third-largest rent price drop in America with rent dropping 18% between March and December 2020 behind only San Francisco and Seattle.

Just remember: despite this extreme drop in rent, the cost of living in Boston is high. It still has one of the most expensive rental markets in America and South Boston is in the upper third of costly Boston neighborhoods.

Does living in South Boston sound like exactly what you’re looking for? Give us a call at Mass Bay Movers once you’ve found the place you’ll call home. We’ll help with stress-free moving to South Boston within your budget.