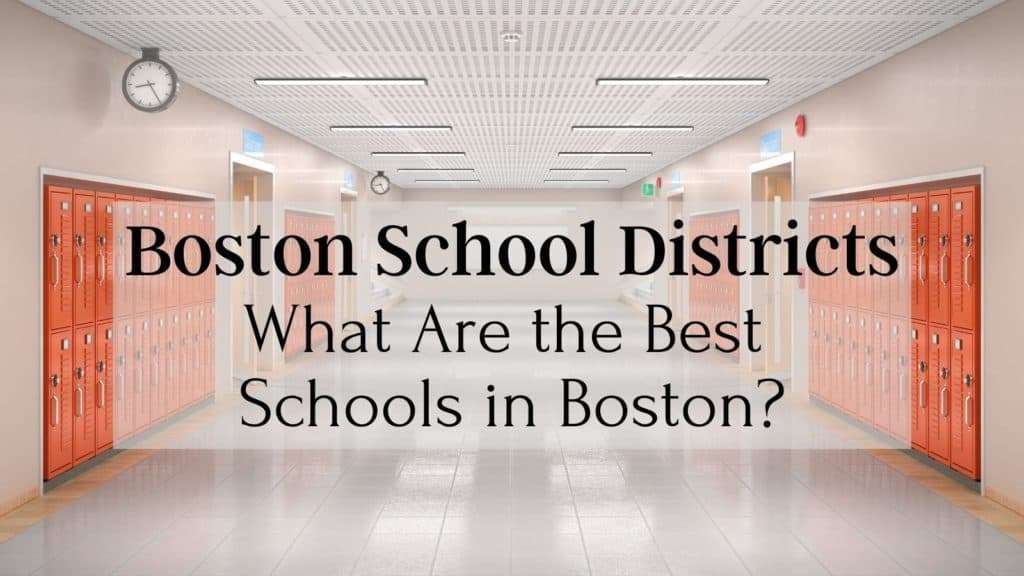 Boston School Districts 🏫 | What Are the Best Schools in Boston? [Guide, Data, Tips]

Famous for its rich history, Fenway Park, and beautiful harbor, Boston is also one of the best cities in America for education. The Boston metro area, with more than 4.6 million residents, boasts not only Harvard University and MIT; you’ll also find dozens of highly rated private schools and top school districts in Boston to help your kids go far. Boston is home to 218 ranked schools, more than half of which are in the top 25% nationally.

If you’re planning to relocate to Boston with kids, choosing a neighborhood or Boston suburb with excellent schools is probably on your list of priorities. Here’s a look at the best school districts in Boston based on test results, independent rankings, and other important metrics.

Frequently ranked as the best school district in Greater Boston, the Dover-Sherborn district serves students in Sherborn and Dover, two of the most affluent Boston suburbs. The Dover-Sherborn High School historically ranks as one of the top-performing public high schools in Massachusetts. It’s been ranked as one of America’s top 100 public high schools by US News and the top high school in the state for 9 years running by Boston Magazine. Nearly 97% of students who graduate attend university or college.

Want to move within this district? The small town of Dover is home to 6,000 people and nestled among farms and rolling green hills. You’ll enjoy the best of both worlds in this family-friendly suburb of Boston: you aren’t far from the city and larger towns, but you can enjoy a more rural environment.

You don’t need to go to the high-cost suburbs to find an excellent school system. Founded in 1647, Boston Public Schools serves the entire city with 33 high schools and enrollment of more than 55,000 students. BPS is America’s oldest public school system with many historic schools like The Mather School, which opened in 1639 as the first public elementary school in the U.S.

BPS is usually a finalist (and won in 2006!) for the Broad Prize for Urban Education which provides $500,000 in college sponsorships for graduates from the district that wins. In most years, BPS receives $125,000 in scholarship money as a finalist.

Boston Latin School, part of the BPS district, is frequently ranked as the best high school in Boston and all of Massachusetts. It was America’s first public high school and 100% of students take at least one AP Exam. This AP participation rate is, of course, unsurpassed. The school also boasts math and reading proficiency of 100%.

Serving students in Carlisle and Concord, the Concord-Carlisle Regional School District has a total enrollment of about 4,000. Despite its small size, the district has one of the highest amounts of per-pupil spending in Greater Boston at $18,900 and boasts high graduation rates (97.5%) and college attendance rates (89.5%). Concord-Carlisle High School was recently named the 45th best public high school in Massachusetts out of 342 schools.

The town of Concord sits northwest of Boston with a population of about 18,000. It is here where “the shot heard round the world” was fired. Known for its many historic sites and famous authors like Henry David Thoreau, Concord is also a great place to live in Massachusetts outside of its school district. While living in Concord, you’ll enjoy amazing outdoor recreation at your fingertips like Walden Pond and the Minute Man National Historic Park. The median home price in Concord is $766,000, however; you’ll pay a premium to get into this district. 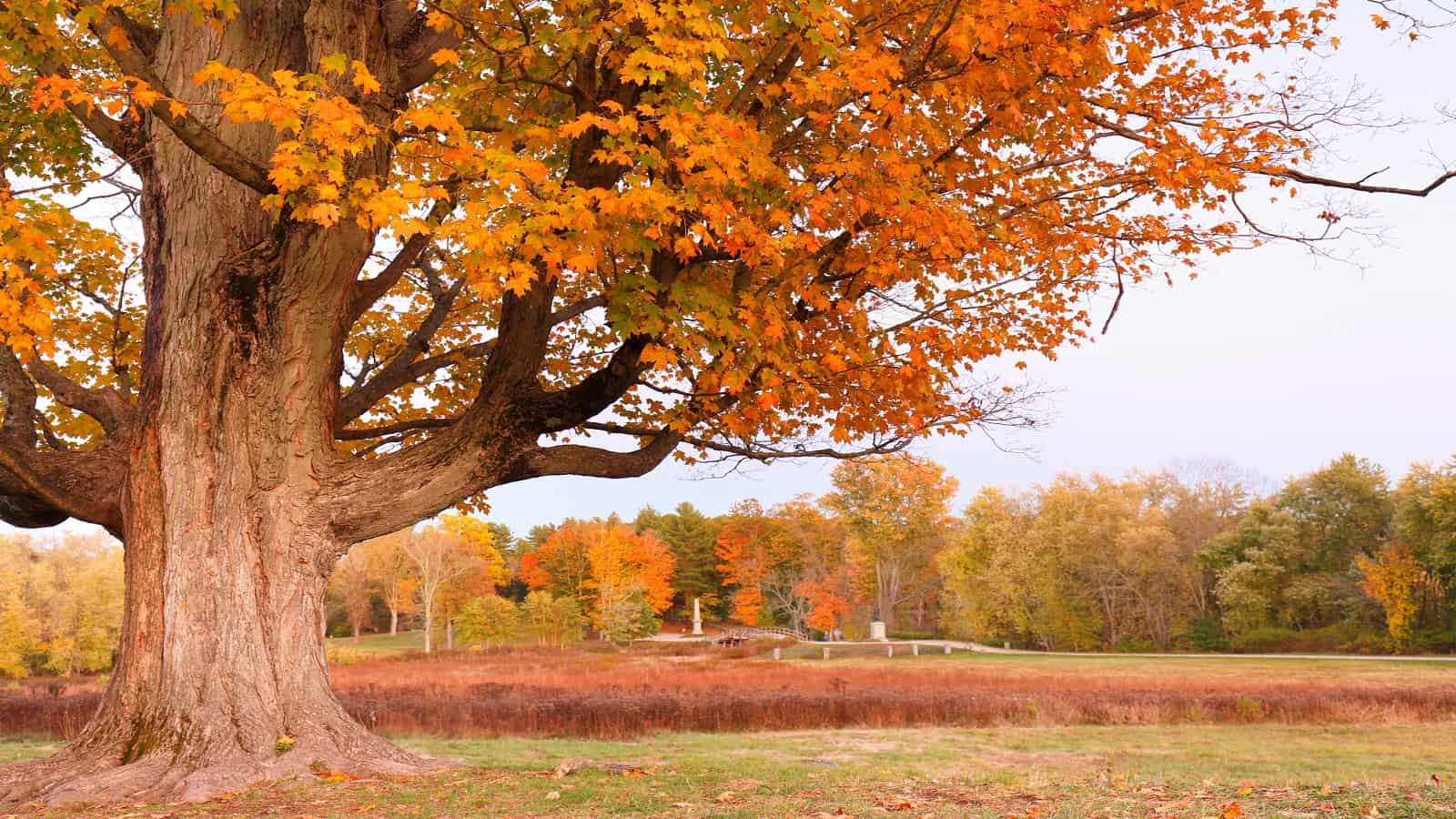 With a total enrollment of about 7,000, Lexington Public Schools serves Lexington, MA with one high school, two middle schools, and six elementary schools. The school system is one of the top school districts in Boston with 84% of graduates going on to attend college or university.

The elementary school children attend usually determines which middle school they will go to. Students who attend Hastings, Fiske, or Estabrook Elementary usually go to William Diamond MS while students who attend Bowman, Bridge, or Harrington continue to Jonas Clarke MS. Both middle schools are among the top schools in the Massachusetts Comprehensive Assessment System (MCAS) testing with notable academics programs like a Mandarin language course that has been lauded as one of the best Mandarin programs in the U.S.

Is living in Lexington, MA right for you? Along with this excellent school system, the city of 33,000 offers plenty to do like the Scottish Rite Masonic Museum, the Lexington Common National Historic Site, and Arlington’s Great Meadows. You’ll be just under 10 miles from Cambridge and 20 miles from downtown Boston.

While dwarfed by Boston Public Schools, the Newton Public Schools district is still one of the largest in Greater Boston with an enrollment of nearly 13,000. It also has one of the highest rates of per-pupil spending at more than $18,000 with 91% of graduates going on to college.

The district has four middle schools and two high schools: Newton South High (ranked #20th in Massachusetts) and Newton North High (#44 in the state) in the village of Newtonville. If you’re moving within the school district and looking for the best public high school in Boston, you may lean more toward Newton South, the smaller and newer of the two schools with slightly better college readiness and test scores. Newtown North also has notable athletics programs which makes it one of the best Boston suburbs for families involved in sports. You can see the school boundaries in Newton here. 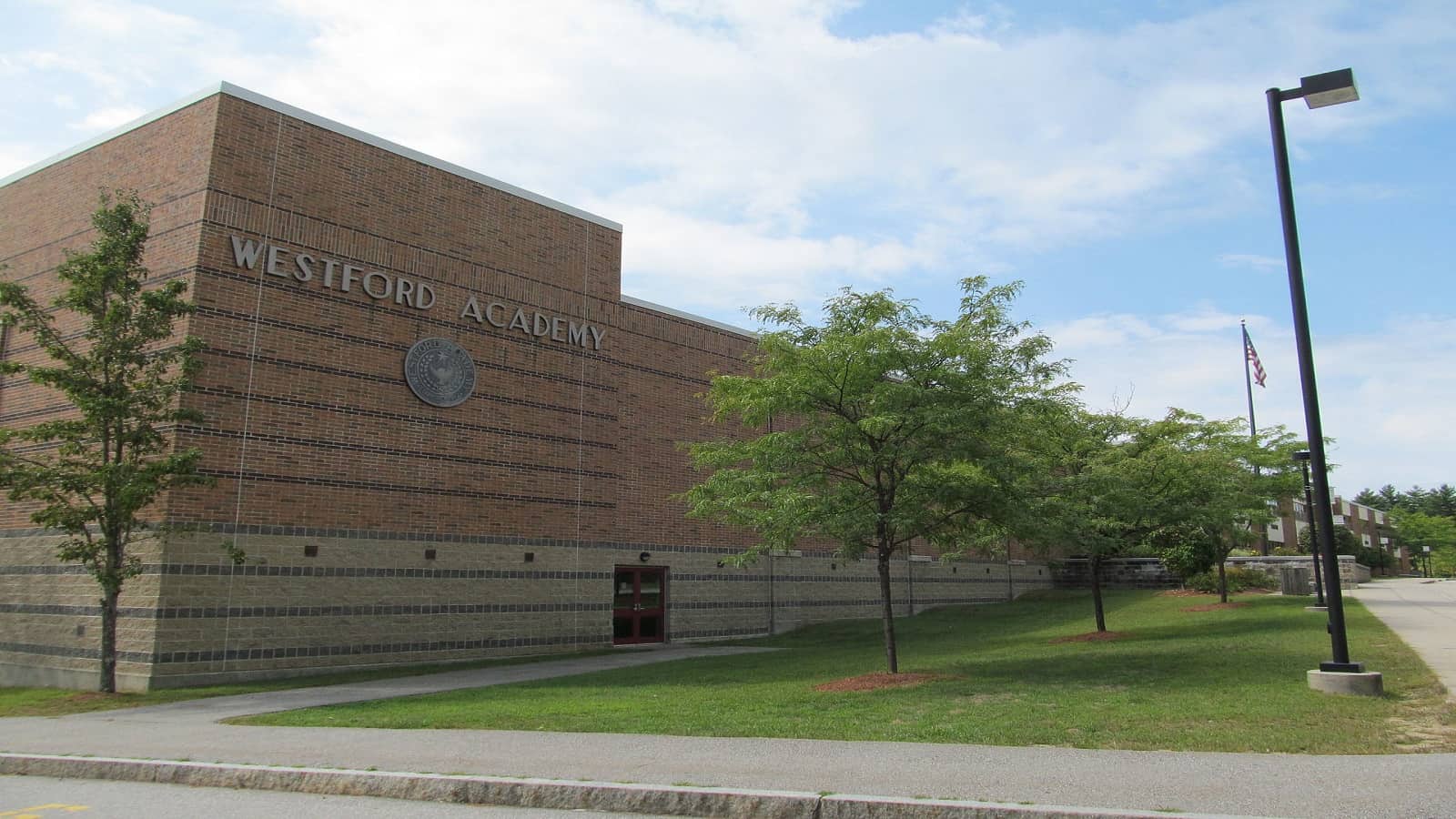 The Westford Public Schools system has more than 5,100 students enrolled and, despite a fairly low per-pupil spending level for the region, is one of the top 10 school districts in Greater Boston. 91% of graduates from Westford go on to attend college.

Westford Academy is one of America’s oldest public high schools and was a private school from 1792 until 1928. Newsweek has ranked it as the second-best high school in Boston and Massachusetts and the 47th best in the U.S.

Westford is one of the more distant Boston suburbs located about 35 miles northwest of downtown. The town has a population of more than 24,000 and it’s been named the 11th best Place to Live by CNN Business. If you choose to settle in Westford, you’ll enjoy a community atmosphere with tons of annual events like the Witch’s Woods Halloween Screampark, Apple Blossom Parade, and Westwood FunFest.

Boston is known for its excellent education options with dozens of top-rated Boston private schools including both secular and parochial options. The following are some of best private high schools in Boston.

Does Boston have good schools?

Boston is known for its great education system. More than half of public schools in Boston are ranked in the top 25% nationally.

What is the best high school in Boston, MA?

What is the top-rated school district in Boston?

The Dover-Sherborn School District is often named the best Boston school district and the best in the state. However, Greater Boston is home to over a dozen highly regarded school districts plus great private schools.

Have you found a school district in Boston you think offers what you’re looking for to help your kids achieve their potential? The next step is choosing a neighborhood and finally making your big move. Mass Bay Movers is here to help with friendly Boston movers who can help you settle into your new home without the stress.