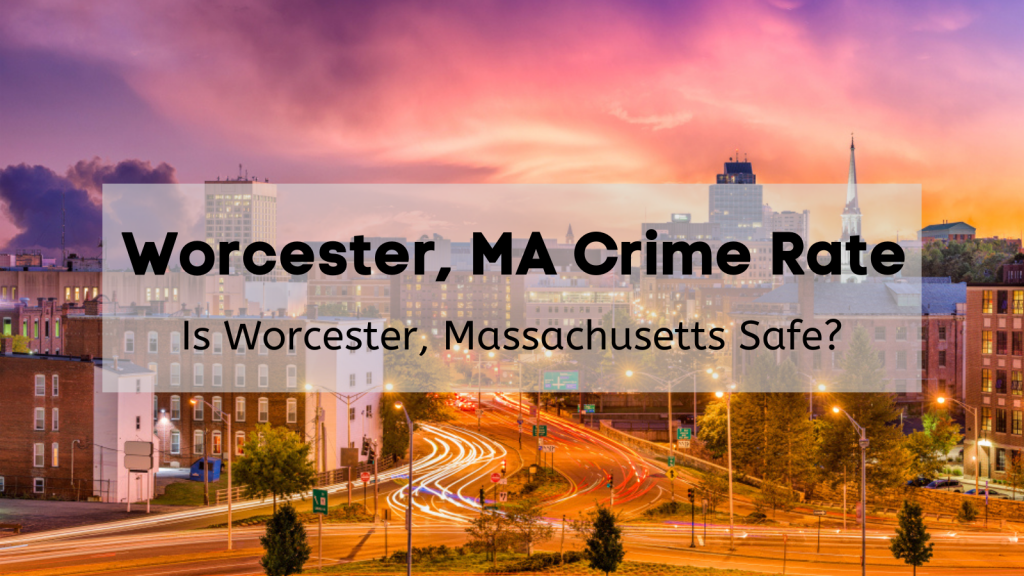 Worcester is a city in Worcester County, MA, and is named after an area in England called Worcestershire. It’s known as the “Heart of the Commonwealth”, which ties into their flag design with a heart in the center. Throughout the years, Worcester has continued to become a more diverse place to live, with plenty of family-friendly activities.

While we’ll get more into Worcester crime rates, we want to note that while some of the crime rates are higher than the national average, there are still plenty of safe, family-friendly, affordable, and wonderful places to settle down in Worcester, MA.

Understanding the Worcester Crime Rate | How Crime Rates Are Calculated

It’s essential to note where the crime data comes from and how the rates get calculated. In this instance, most of the rates come from the FBI when they collect and analyze crime data from local law enforcement agencies throughout the country.

The data gets put into multiple categories: total crime rate, violent crime rate, and property crime rate. Know that the rates can change and vary each year for different reasons and causes. The most common include:

CNN discusses how crime stats can be misleading and goes on to how to understand them better. In fact, even the FBI discourages using crime statistics and rates to compare metro areas, cities, and states because it doesn’t give the entire story. The tools that share city or state crime stats are still essential, but they are not the only way to determine if a place is safe.

Since there has been a problem with the crime stats not being as accurate or detailed as they could be, in 2021, the FBI’s Uniform Crime Reporting System was phased out and replaced with the National Incident-Based Reporting System (NIBRS).

This new system helps collect data on more crimes and even has 20+ indexed crime categories–requiring agencies to submit a more detailed report. While it’s good that more crimes are getting reported and categorized, it can show an increase in crime, even if nothing has changed.

What Is the Worcester Massachusetts Crime Rate?

When you’re moving to a new space, you often are curious about the crime rate. In addition to other research, it can be a good tool. Here’s the breakdown of the crime rate in Worcester, MA.

Now, you might be wondering how that compares to the national crime rate and the state crime rate. Here’s a breakdown:

While the Worcester crime rate might be higher than the national and the Ohio crime rate average, that doesn’t mean Worcester isn’t a safe place to live. Every city has crime, and there are still plenty of safe, secure, and family-friendly areas of Worcester to call home. Worcester, MA, was voted as “One Of The Best Places To Live In The US In 2022,” according to Livability.

Worcester also has some of the best public schools in Massachusetts.

When you look at the city as a whole, it’s a great place to settle down and start a family.

Crime maps help you to get a better sense of the total crime rate in an area before you move. It allows you to see the best place to settle down while also letting you know the places to avoid. You can get a better idea regarding local crimes from sites like City-Data, Areavibes, and NeighborhoodScout. While the Worcester Police Department doesn’t have the Worcester police reports on their website, don’t be afraid to call and ask to see if you could get the total crime stats for Worcester, MA.

While they don’t have the total crime report, if you have an elderly person in your life, check out this essential document that the Worcester PD put together to help identify and prevent fraud against our older loved ones.

In 2020, the violent crime rate for murder was lower than the national average in Worcester, MA, and it’s considered a great place to live and retire. And over the years, Worcester’s violent crime rate has continued to trend downward and decrease year over year. Yes, there are areas to avoid in Worcester, but this is true for every city throughout the United States.

While the property crime rate is still higher than the national average, according to the Pioneer Institute of Public Policy Research, Worcester has seen a decrease in property crimes by 41% from 2010 to 2020.

While there are no specific neighborhoods to stay away from in Worcester, MA, just like any other city, there are places that have more crime than others. For Worcester, the higher crime areas are the south and east parts of the town, like Grafton Hill, Vernon Hill, Ward Street, Pleasant Street, and Belmont Hill, but the police department is working hard to make a change and transform those areas.

A total of 492 law enforcement employees make up the force, with 442 of that total being sworn officers or two officers per 1,000 residents.

There are so many safe neighborhoods in Worcester, MA, to call home, but here are some of the top ones.

When you think about the West Side (a.k.a. West Worcester), the first three words that come to mind are historical, safe, and family-friendly. It has great schools, plenty of fun attractions to check out, and most importantly, it’s one of the best neighborhoods in Worcester! West Side is also home to a highly sought-after college prep school: MA Academy for Math & Science.

Whether you’re a young professional, have a family, or are looking to retire, the West Side has something for everyone!

With a low crime rate, fun restaurants, and cafes like the Bean Counter Bakery Cafe and Oak Barrel Tavern, Forest Grove is known for being a safe oasis. It’s a quiet space that’s great for retirees and families.

Shrewsbury Street is a safe community that’s perfect for young professionals. While it’s a safe place to settle down, Shrewsbury Street is a trendy community best known for its nightlife, restaurants, and bars. While this area might be popular for the younger generations, it’s also a highly-desirable place for families because of the low crime and amenities like local parks, splash pads, and sports fields.

When you choose one of the best, low-crime neighborhoods of Worcester, you’ll have peace of mind knowing that you, your family, and your loved ones are safe.

Worcester Safety Tips | How To Avoid Crime In Worcester

Whether you’re a current resident of Massachusetts but are relocating to Worcester or are moving to Worcester, MA, for the first time, you’ll want to take the necessary steps to ensure your safety, especially when getting to know a new area. Here are some of the top things everyone should do to help avoid becoming a victim of a crime and ensure your safety in Worcester:

We recommend implementing these into your new neighborhood, regardless of the neighborhood, because it’s a good practice to live by in life.

But whether you take all of these or make a list of your own, you have to decide what makes you feel safe, comfortable, and at peace in your home.

While we’ve already talked about how the Worcester Police Department continues to grow to meet the needs of their community, there’s a handle full of different departments that handle specific needs of the community:

The Worcester PD is working hard to provide the best service and protection to this beautiful community. There are a total of 492 law enforcement employees, with 442 of that total being sworn officers – that’s two officers per 1,000 residents.

The Chief Commissioner is Steve M Sargent. Anyone can access the Worcester police reports, so if you’re curious about learning more, check out their website.

While the total Worcester crime rates might be higher than the national average, the simple answer is yes. Worcester is a safe place to live. There are some places to avoid, but that’s common in any city.

Where Are The Safest Worcester, MA Neighborhoods?

The safest neighborhoods in Worcester, MA, include the West Side, Forest Grove, and Shrewsbury Street.

Where Can I Find The Worcester, MA Police Reports?

You can find the Worcester Police reports here.

Are you interested in making Worcester, MA, your home? Mass Bay Movers is here to help make your transition seamless! With our hardworking, dedicated, professional team of experts, we will be there for you every step of the way. Call us at (978) 587-3775 for a free estimate!