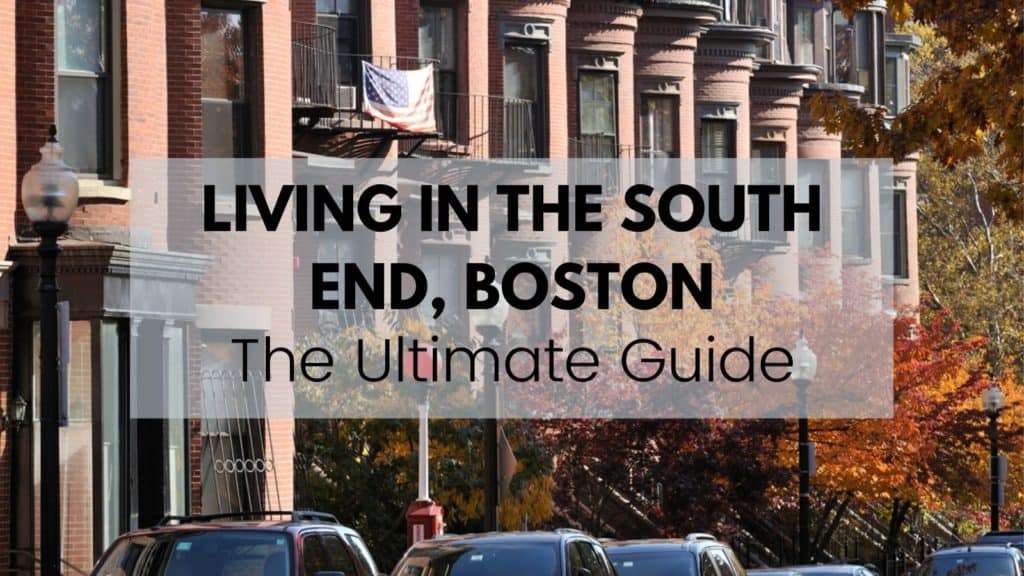 South End is a neighborhood in Boston that’s home to the largest intact Victorian row house district in the United States. South End is known for being on the National Register of Historic Places, and there are nearly 30 residential parks that are scattered amongst the 300 acres of row houses that reside in this Boston neighborhood.

One of the benefits of living in the South End suburb is that it’s a safe and diverse area. It’s known as a melting pot, which is full of kids, families, single adults, and a thriving LGTBQ friendly community. Moving to the South End is perfect for people who want a balance of thriving city life, like delicious restaurants, and suburbs, like the brownstone homes that line the streets. South End is sometimes called the Boston Landmark District, and it’s one of the best places to live in Boston.

History of The South End

The South End was one of the first Boston settlements. When downtown Boston became too crowded, the city started to expand. Wealthy settlers began migrating to the South End, and it was considered to be a fairly affluent suburb of Boston. This all changed at the beginning of the 20th century. Beginning in the 1900s, more immigrants began living in the South End. It became known as the tenement district to reside in for those new to the United States. The settlement houses were named after historic figures and other notable places. Their names are the South End House, Haley House, Lincoln House, the Harriet Tubman House, and the Children’s Art Centre. These homes have now been put together and are known as the United South End Settlements.

In the 1940s, migrating to the South End was common for gay men. It was really one of the first LGBTQ friendly neighborhoods in Boston. Right around this time is when the South End urban renewal began. Most of the slums were bulldozed and new row houses were put in, attracting more families. Beyond that, the South End used to be a major jazz mecca. For 55 years, the American Federation of Musicians Local 535 was the number one Black musicians’ club in the country.

Location & Transportation in the South End

South End Boston is a Boston community in Massachusetts. It borders Back Bay, Chinatown, and Roxbury. South End is south of Back Bay. It’s to the northeast of Chinatown. It is also north of Dorchester and southwest of Bay Village. Many people may assume that South End is directly south of Boston’s city center, but that’s not true. Common streets to travel while calling South End home are Columbus Avenue, Tremont Street, and Washington Street. South End’s zip code is 02118.

There’s currently no Massachusetts Bay Transportation Authority (MBTA) that services those staying in the South End. However, there are many subway stops that you can use. The common ones are Copley, Symphony, and Prudential on the Green Line. Those taking the Orange Line use stops like Ruggles, Massachusetts Avenue, and Back Bay. Public transportation is very popular in the South End because parking can often be an issue. Other people may take the Commuter rail service that runs through the South End. Or, the bus rapid transit Silver Line has multiple stops for commuting throughout this Boston area. 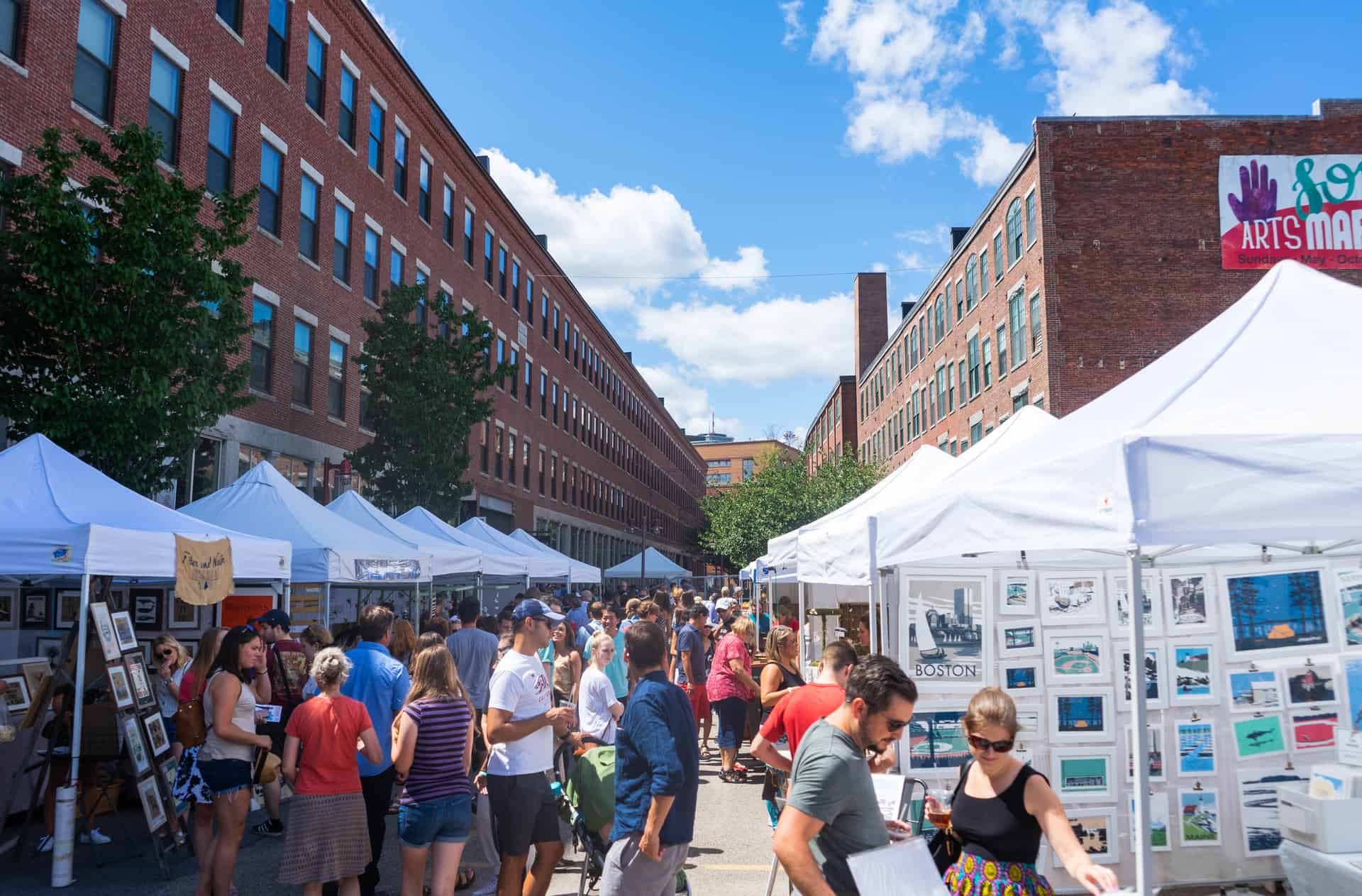 Who Lives in the South End?

The median income in South End is $69,900. 60% of the people have higher education, with nearly 30% having a master’s degree or higher. The people in the South End are well educated and smart, working professional jobs in Boston. It’s currently known as one of Boston’s most popular neighborhoods, and it’s due to the eclectic spirit that is here. Between the numerous art studios and theaters, people are constantly talking about this suburb of Boston.

Things to Do in South End, Places to Eat, and Where to Shop

There are many attractions in the South End, and you certainly won’t be bored! One of the top things to do in the South End is to visit The Mills Gallery. This is an art gallery that has over twenty exhibits throughout the year. There are also plenty of boutique shops with some of the best walkability in the South End, so you can quickly go from place to place. Check out Diseno, which sells South American furniture.

If you’re looking for handmade goods and food trucks, check out the South End Open Market at SoWa, which is held on Saturdays from May through October. It’s one of the best farmer’s markets in Boston. You’ll also find many people at Cyclorama, where there are many speaking events and theater performances.

When it comes to shopping for food, you have to check out The Butcher Shop, which sells local meats. But if you need Goldfish for your kids or a combination of groceries and toiletries, the best supermarket in South End is South End Food Emporium. It’s a local shop with great prices.

Planning to eat out instead? You can’t miss out on brunch at The Beehive, which is one of the most family-friendly South End restaurants. Another delicious restaurant in the South End is Aquitaine Bar a Vin Bistro, which is known as the best South End restaurant and has fresh pasta, steaks, salads, and more, and has been in business for over 20 years. If drinks are all you need, the best bar in South End is J.J. Foley’s Cafe, which has a full service bar until 2AM, and has been in business for over 100 years. It’s one of the most historic places in the South End.

The South End isn’t considered to be very affordable. Though it’s a diverse neighborhood, it also has a large financial disparity between residents, something that’s pretty obvious when looking at the South End real estate market. South End is one of the most expensive places to reside in the United States. The average price of a home in the South End is $1.19 million, which is up 28% from last year. This amounts to $1,090 per square foot. Most of the homes in South End are tenement style, so it’s really like buying an apartment. The row houses allow for some larger units, but your walls will still be attached to the house next to yours, so you may hear your neighbors more than in other suburbs. The real estate market in the South End is considered somewhat competitive, and homes go pending in about 37 days. Most people put around 25% down on the home they are purchasing. Less than 40% of the people migrating to South End purchase a home.

For the majority of people in the South End that rent, you can expect to pay a fairly large amount each month. The average rent in South End is $3,625. The average cost of a one-bedroom apartment is $2,666. South End’s rent is the second most expensive in Boston. Some of the common schools in South End are Hurley School, William McKinley, Blackstone Elementary School, and Orchard Gardens.

Moving to Boston? South End is a premier Boston neighborhood, and you can’t go wrong. With a diverse feel and close proximity to the big city, it’s easy to find employment and get downtown. When it’s time to change your address in the South End, give Mass Bay Movers a call. We’re the best South End moving company, and we’ll make sure to take your stress away!