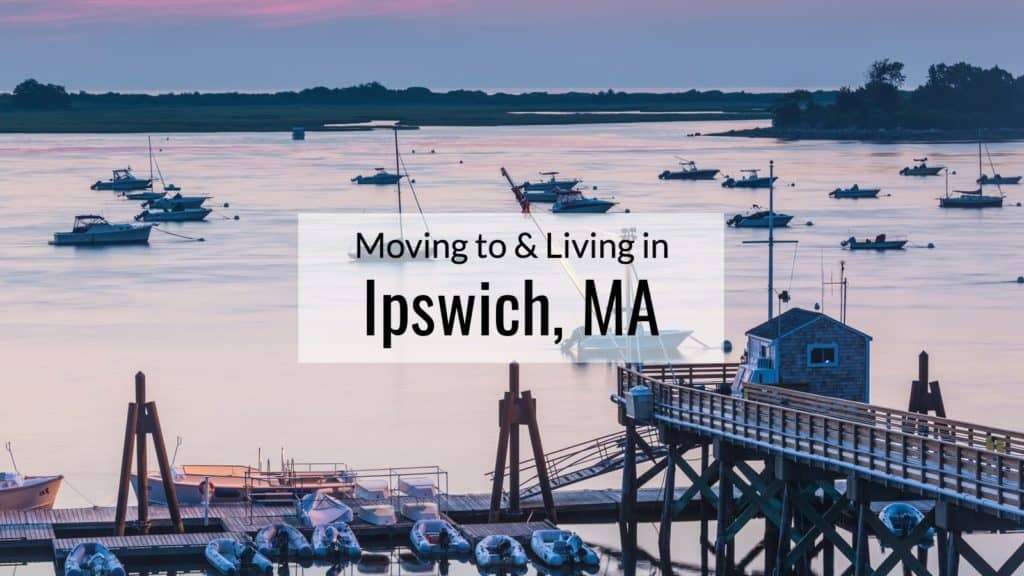 Ipswich MA 🌊 | The ULTIMATE Living In & Moving To Ipswich Guide

Despite what you might initially think, Ipswich is not a slang name for some weird kind of sandwich, but rather the name for an idyllic small coastal town about an hour north of Boston on Massachusetts’ coast, located in the coastal Essex County. Ipswich was one of the first areas to be settled by the English in the early 17th century, and retains the nickname of the “Birthplace of American Independence”, due to being the site of an earlier, lesser-known rebellion over taxation without representation in 1687. Today, Ipswich is one of the most beautiful coastal communities in Massachusetts. Ipswich is home to many notable residents, like famed American novelist John Updike and musician Melissa Ferrick.

The town of Ipswich has a population of 4,699 distributed out over 1.6 miles at a population density of about 2,800 people per square mile. The median age here is 44.4, which is 10% higher than the Massachusetts average of 39.5. The median household income in Ipswich is $65,893, which is actually 20% lower than the average household income for the state of Massachusetts, which is $81,215.

Ipswich’s zip code is 01938, while the area codes are 351, 356, and 978. Ipswich is a forty-minute drive north of Boston, and is bordered to its north by Rowley, and bordered to its south by Hamilton and Essex.

Thinking about moving to Ipswich, but worried about the crime rate? With an A+ rating on Areavibes, you and your loved ones will be safe and sound while living in Ipswich! The crime rate here is 81% lower than the national average overall, while the violent crime rate is 64% lower, and the property crime rate is 85% lower.

Cost of Living in Ipswich, MA

With safe and beautiful communities and relative proximity to the Boston metropolitan area, it should come as little surprise that living in Ipswich can be quite pricey, with the cost of living here being 24% higher on average than other places in America, according to Payscale. Homes in Ipswich are more expensive than usual for Massachusetts, but are not as expensive as those in the Boston area, with the average home costing you $418,100 on average. Ipswich’s housing is rather expensive compared to the national average, however, and you can also expect to pay more for groceries, utilities, and transportation. Renting here also is not cheap, but not quite as expensive as Boston, with the average rent for an apartment being $1,543.

Ipswich can drain your wallet quickly, it’s true, but compared to the surrounding area, Ipswich is safe, beautiful, and affordable. There are few places better to live in Massachusetts!

Moving to Ipswich means you will be served by the Ipswich School District, which is host to a dozen or so highly-rated schools. Of these dozen or so schools, 75% are rated above average, 25% are rated average, and none are rated below average, according to GreatSchools. Some of these fantastic institutions of learning include Winthrop, Ipswich Middle, and Ipswich High, all of which are rated above average. Rest assured, your child’s education will be some of the best in the country while living in Ipswich!

Like Boston, you can expect Ipswich to be cool, rainy, and snowy. You can expect lows of 16 degrees Fahrenheit during the winter months, and highs of 81 degrees Fahrenheit during the summer months. Ipswich experiences more than the average amount of rainfall when compared with the rest of the United States, with 49 inches per year as compared to the national average of 38 inches. Ipswich experiences quite a large amount of snow, with 52 inches as compared to 28. The best times to visit Ipswich, in terms of comfort rating, are July and August.

Ipswich is truly without comparison when it comes to small towns, as there is likely no other one-mile-squared area so jam-packed with truly historic neighborhoods. Check out some of your neighborhood options below:

Want to live alongside Ipswich’s Farley Brook, right in the heart of the town? Brown Square is filled with beautiful Victorian-era homes alongside the seasonal waterway. How about the oldest part of Ipswich, dating all the way back to the 1630’s? Then take a look at Jeffreys’ Neck Road. If you want to see more about Ipswich’s neighborhoods and their extensive history, check out the Historic Ipswich blog!

If you want to make yourself a part of any of these communities, you should check out the latest listings for homes for sale in Ipswich, MA.

Those planning on making a living in Ipswich should know that wages and cost of living has been relatively stagnant, according to Payscale. The most popular employers in this community are Ebsco Industries, Inc. and Ipswich Public Schools. The most popular positions of employment are Software Engineer, Account Executive, and President. The average salary for a worker in Ipswich is $73k a year, while the average hourly wage is $19.39.

If you’re planning on getting gainful employment after moving to Ipswich, seeking out a job in either the information service industry or the local school district are your best bets. Check out the latest listings for jobs in Ipswich, MA here.

Things to Do in Ipswich, MA

Moving to the historic community of Ipswich means plenty of opportunities to visit fantastic attractions that’ll entertain you and your family, as well as covering all your shopping needs. Check out local shopping centers like the Ipswich Shopping Center for all your shopping needs! You should also check out some of the best things to do in Ipswich, MA below:

Castle Hill on the Crane Estate

Among the most beautiful of Ipswich’s many pieces of historic architecture is the Crane Estate on Castle Hill. With 2,100 acres of manicured lawns and a huge castle-like mansion, the Crane Estate is a wonderful piece of living history appropriate for all ages.

The natural beauty of Massachusetts is on full display in the Ipswich River Nature Sanctuary. Host to a wide variety of wildlife and stunningly pretty hiking trails, this nature sanctuary is the place to get in touch with the natural world and de-stress.

Places to Eat in Ipswich, MA

Alongside its host of things to do, Ipswich is also home to plenty of great eats! Check out some below:

Want that classic East Coast pub experience? Look no further than the Choate Bridge Pub in Ipswich, which provides great drinks, great food, and a great experience whether it’s a family night or a guy’s night out.

Who doesn’t love pizza? Not the residents of Ipswich, that’s for sure! And when those residents want the best pies, they come to Riverview Pizza, which serves all different kinds of pizzas on thin crusts in a 70’s diner setting.

Ready to take that last step and start your journey to making Ipswich your new home? Give Mass Bay Movers a call! Our crew of highly-trained professional movers will ensure your move is a stress-free process at affordable rates! Call now or fill out our online form for a free quote!