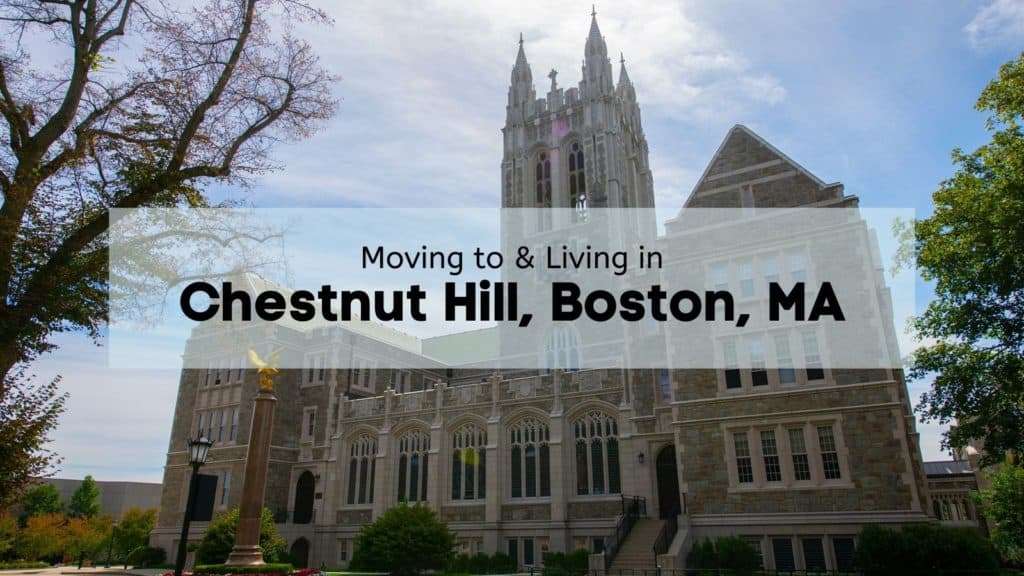 Boston is among the oldest cities in the US, with the first European settlement of the area occurring around the early 1600s with the arrival of the English. Chestnut Hill’s history as a unique community is relatively short by comparison. The area was initially just unworked land, like most of Boston before Europeans arrived. As time went on, and the amount of people in Boston grew, the area was quickly taken over as farmland, although farming in the area was difficult due to the swampy areas. Additionally, the area was split between Newton and Boston at the time.

Around 1870, with the area being ceded fully to Boston, development around the reservoir rapidly began. The ever-famous Boston College was founded a few years before, which led to many families or aspiring students to move to the area in the hopes of admitting their children or selves to the prestigious institution. While much of the area remained farmland well into the 1900s, by the modern day, Chestnut Hill is not really used in an agricultural context anymore. For the most part, Chestnut Hill is now an affluent, residential community with a wide variety of wonderful architectural styles on display.

As previously mentioned, Chestnut Hill is located just about nine miles south-west of Boston’s downtown area, and its geographic area is precisely the same as the 02467 zip code. The neighborhood is split between Norfolk and Suffolk County, and is bounded by the Newton Commonwealth Golf Course to the east, and to the west by the MBTA railway yards.

As you might expect of a neighborhood with railway yards in its limits, Chestnut Hill is serviced by quite a few train lines, as well as various other forms of public transportation. The Green Line of the MBTA services the area, with three separate stations, B branch, C branch, and D branch, meaning you’ll never be far from the transportation you need.

As previously stated, Chestnut Hill’s single zip code of 02467 is almost precisely aligned with its geographic location, and Chestnut Hill remains the sole community in the area. If you prefer to use a car over a train or bus, the drive from Chestnut Hill to Boston’s center is only a short 18 minutes, although times may vary with traffic.

If you’re in the market for a home in Chestnut Hill, you’ve probably found out by now just how affluent this community is. Some of the most notable individuals in the United States live here, and for good reason! Convenient location in Boston’s transportation infrastructure, some of the most beautiful and varied residential architecture in the city, and plenty of luxury attractions are reasons why individuals such as Patriots quarterback Tom Brady, Red Sox and Liverpool F.C. principal owner John W. Henry, and many more famous people have chosen to make their homes here!

Worried about crime in Chestnut Hill? While there’s no census data on the area specifically, the surrounding area, Newton in particular, are some of the safest areas in the United States, and resident testimony does nothing to dispute this reality in this neighborhood. You and your loved ones will feel very safe in this wonderful neighborhood!

What to Eat, Do, and Shop in Chestnut Hill, MA

Chestnut Hill also has plenty to do aside from shopping. For instance, the most well-known attraction in the area is the beautiful Hammond Pond Reservation, which is a popular spot for relaxing hikes and rock climbing. Another interesting attraction, although it may not seem so at first, is the Metropolitan Waterworks Museum. Although it may seem a little dry to explore Boston’s old water and sewage systems, it makes for a surprisingly exciting experience, and the whole family will be entertained!

Looking for some good eats while living in Chestnut Hill? Locals are big fans of Seasons 52, an upscale wine emporium and seasonal dining establishment that falls perfectly in line with the affluent tastes of Chestnut Hill clientele. By the way, the “seasonal dining” bit refers to Seasons 52’s rotating menu, which serves different dishes based on the time of year. Those with more of a taste for the sea can try out Legal Sea Foods, and yes, you can breathe a sigh of relief, as this is not illegal seafood! Jokes aside, Legal Sea Foods’ upscale setting and positively rambunctious seafood dishes set it above and beyond the standard seafood fare. A must-visit in Chestnut Hill!

Chestnut Hill prices reflect its affluent nature to the utmost degree, with homes that sell for several million dollars not being an uncommon sight at all. The median home price here is $917,000, more than double the median price for a home in Massachusetts. There’s a lot of older, large homes here, representing a wide variety of beautiful architectural styles, as well as newer developments that might please those seeking a more modernized homestead. According to Redfin, the median amount of time for a house to be on the market in this area is 31 days, with only 2% of homes being sold below a hefty list price.

Renting here is certainly going to be some of the most pricey in Massachusetts, if not the nation at large, with the average monthly rent for all apartments being $3,139. Chestnut Hill is beautiful, safe, and high class, and that comes with its ensuing costs. However, any cost is more than worth the price for the opportunity to live in this wonderful community. If you are someone who wants to live the high life, there is simply no contest in Boston when it comes to Chestnut Hill.

If you’re interested in looking at listings for Chestnut Hill’ homes, take a look at some Chestnut Hill, MA real estate options here.

Ready to take that last step and start your journey to making Chestnut Hill your new home? Give Mass Bay Movers a call! Our crew of highly-trained professional movers will ensure your move is a stress-free process at affordable rates! Call now at 978-587-3775 or fill out our online form for a free quote!